Heavy rainfall and subsequent floods have dominated the UK news in recent days, with various parts of the country struck by weather-related disruption. There have been numerous reports of residents requiring alternative accommodation, train services being discontinued, and roads closed, with South Yorkshire being the worst-affected area.

More than 40,000 sandbags have been handed out in Doncaster alone as the emergency services struggle to cope with the scale of the issue. According to the local council, 2,000 people have sought the assistance of a dedicated emergency helpline as the neighbourhood comes to terms with the devastation.

Unsurprisingly, it has been a particularly busy time for Sykes Pumps with businesses desperate to safeguard their premises and restrict the impact of flooding wherever possible.

Our engineers have been working with a multinational infrastructural group by installing pump hire solutions to prevent further flooding in nearby locations that have been identified as high risk.

Two of our 12” Super Wispaset 300 silenced pumps are currently being used to empty an old farming dyke which is full of water as a result of torrential rainfall. The dyke in question is more than two miles in length but also fed by other dykes and water pipelines around the villages of Hatfield and Fishlake – creating a potentially catastrophic backfill of water. 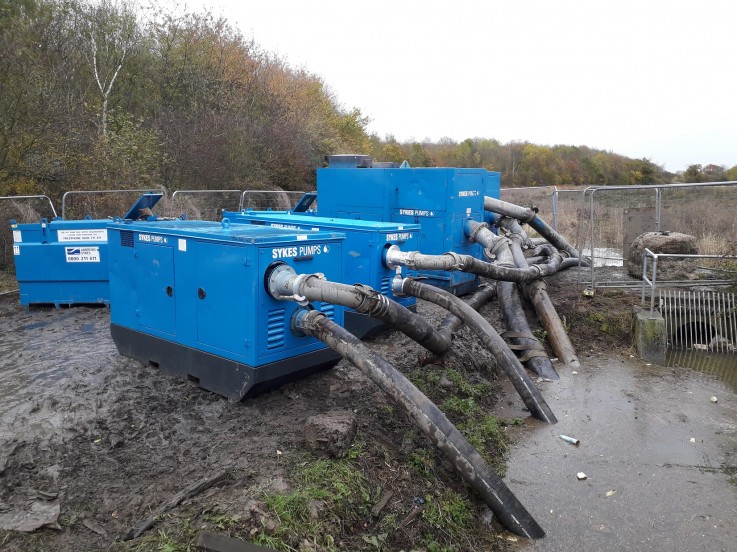 A small pedestrian walkway made of concrete pipeline was situated nearby but this collapsed under the pressure of an excessive build-up of water. Sykes Pumps was contacted and asked to intervene following the collapse due to concerns that the water would overflow, run down the hill and flood a large number of industrial facilities situated a short distance away.

One of our local experts responded to the request immediately and advocated that we implement an overpumping solution that would divert water past the point in which the pipe had crumbled and safely discharging it further up the channel.

The two 12” pumps originally supplied were quickly joined by two 8” Super Wispaset 200 silenced units to ensure the required flow rates were comfortably achieved. We deliberately supplied pumps that were quiet in operation as they were expected to run continuously on a site situated close to a residential area where noise must be kept to a minimum.

Our pump hire solution has been effective in averting further floods on a major industrial site, with the speed of our response playing a crucial role in ensuring a greater disaster did not occur.