After a large fire broke out on a £6m yacht moored in Torquay Harbour, Sykes Pumps was called into action to assist a major clean-up operation. The vessel – which was 26 metres long – was destroyed following a devastating inferno.

Firefighters from all over South Devon were sent to the scene to help combat flames and smoke, which also caused significant damage to the pier’s newly-installed wooden decking.

Once the blaze was put out, the next phase of a critical recovery process involved safely retrieving nine tons of diesel fuel from the boat once it had been lifted above the surface of the water.

The incident was widely publicised in local and national media at the time, amid well-founded concerns about the potential for pollution to devastate the area unless decisive action was taken. That’s where we came in.

As per the harbourmaster’s instructions, the yacht was raised until the hull was both visible and accessible.

We had delivered four of our GP100 open set pumps to nearby Southampton, before being moved by barge to the location in Torquay. These units were accompanied by four settlement tanks and configured around the wreckage, enabling residue diesel to be carefully pumped out as required.

Although inflatable booms were installed by third-party engineers prior to our involvement in the project, the risk of pollution was still very much present until our pumping solution had been implemented.

The customer was delighted with our speedy service, which helped avert a potentially substantial environmental disaster in highly unfortunate circumstances. 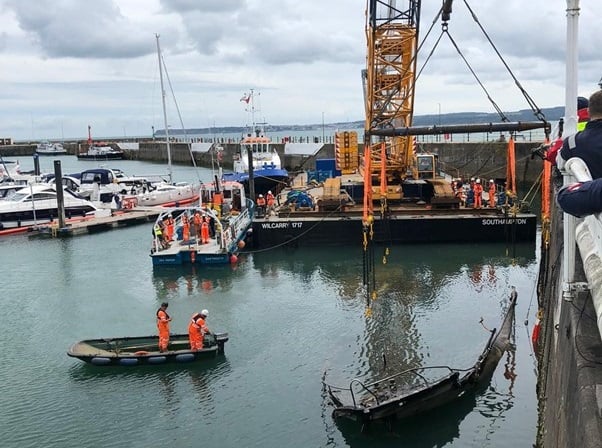