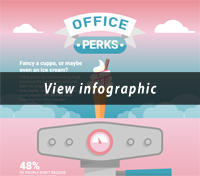 From table football to a simple cuppa, perks in offices around the country differ. Andrews Sykes wanted to shed some light on the subject by running a survey amongst office workers around England and Wales to see who wants and gets what.

Been thinking you’d like to work less hours in the summer months? Well here might be some serious ammo as to why you should be seeing more perks in your office:

What office benefits do people really get?

When office workers were asked which they would consider office ‘perks’, they were all about the hot beverages. Free tea/coffee facilities came out as the factor that appeals to the majority (59%), followed by free fruit/snacks (52%), subsidised canteen (51%) and the ability to work from home (43%).

Turns out that getting your 5 a day is what females crave more as a benefit, with free fruit/veg holds most appeal among women (55% vs 47% of men). However, looking into the social side, men are more likely to value a free bar than their female colleagues (39% vs 26%), as well as a ping pong or table football (23% vs 15%).

Unsurprisingly, the office perks most commonly offered by companies are free/tea coffee facilities (52%), yet 48% don’t offer this out to their employees. That means those deprived of hot beverages at work will be spending on average £959.60 a year to get their caffeine kick. The most popular benefits offered by employers are showers (29%), changing facilities (24%), the ability to work from home (22%) and the ability to regulate the office temperature (20%).

Who is more likely to receive benefits from their office?

There was a surprising 19% of workers say their company doesn’t offer any of the perks listed in the survey – with the government/public services sector scoring the worst (32%) – in comparison to just 13% of employees in the financial services sector.

Workers in small companies with less than 50 employees are the most likely to miss out on the perks that are more commonly offered in larger companies, such as changing facilities and showers, while large companies with over 250 employees benefit from these facilities, as well as extras such as subsidised canteens and free/discounted gym passes.

How about Summer office perks?

A whopping half (49%) of office workers surveyed say their company does not offer any summer-specific perks, while just one in ten go on team outings (9%) or have summer hours, such as leaving early on a Friday (11%).

Coming out top for popular summer perks offered were flexible hours and a more relaxed dress code (both 22%) and again, those in companies with 250-1000 employees are the most likely to benefit from these (39% and 30%).

It’s a win for Southerners out there, as workers in London are the most likely to get summer benefits, with 23% getting free ice creams/treats vs 13% on average, while 32% have flexible hours and 29% a more relaxed dress code.

The most wanted summer perks that workers are after are flexible hours (43%), summer hours (41%) and a tasty 33% for free ice cream/treats – with those aged 25-34 the most attracted to these.

But what would people be willing to sacrifice for these? Well, 38% would sacrifice free tea and coffee for their desired summer perks, 28% company discounts at the pub or gym, and 31% would give up 30 minutes of their daily lunch break.

However it looks like workers aren’t willing to sacrifice when it comes to bringing home the bacon, with slightly less being willing to give up monetary benefits – but 16% would give up £500 of their annual salary and 14% would sacrifice £5,000 of their annual take-home, along with 15% that would forego their bonus.

Turns out companies may want to consider offering summer perks if they’re looking to put a smile on their employee’s faces, when considering that 46% said these would make them feel happier at work and 37% would feel more motivated. Furthermore, a quarter would feel more committed to the company and a fifth would work harder during the hours at work. This particularly rings true for young workers aged 25-34, so it’s looking like offering more benefits could well pay off in more ways than one.