Home Blog Andrews Air Conditioning Temperatures at the World Cup: Could they really have an influence on the outcome?

With things beginning to hot up at this year’s World Cup in Russia, we considered the impact temperature could have on the remaining countries vying for glory.

History shows us that a strong correlation exists between the continent from which the eventual winner comes from, and the continent where the tournament is being held. Traditionally, climatic factors have been widely cited as a significant contributory factor in shaping the outcome – if not a primary reason – and there is certainly evidence to support this notion.

In fact, the 2014 World Cup in Brazil was the first tournament hosted in Europe or the Americas that was won by a country not based in the host continent. Italy won at Germany 2006, France won their own tournament in 1998, Germany triumphed in Italy in 1990, and so on.

Germany’s win in Brazil four years ago broke this trend – but it’s the exception, not the rule. Which brings us to Russia.

As the world’s largest country by surface area, it’s fair to say there’s a lot of disparity between the temperatures of the various stadia involved.

Sweden’s clash with Switzerland in Saint Petersburg on Tuesday is expected to be played in extremely mild conditions. Forecasters have predicted that the mid-afternoon temperature will be 14°C – a far cry from the scorching conditions Brazil and Mexico can expect in Samara 24 hours before, where highs of 33°C are expected. 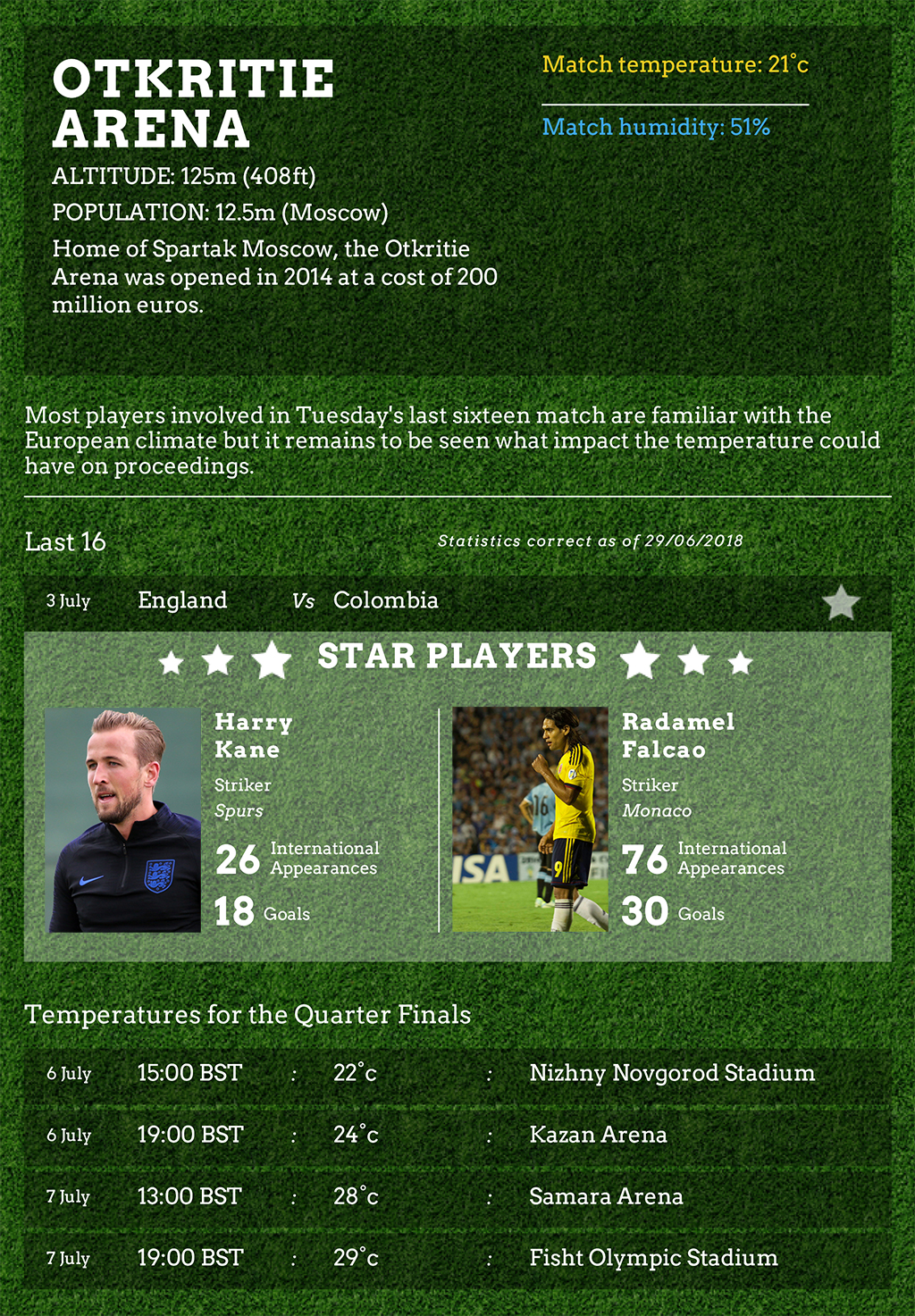 England’s crunch match with Colombia in Moscow will be played in conditions that arguably favour the Three Lions. Weather experts say that it’ll be 17°C at kick-off, which is far cooler than current UK temperatures. Many would claim that these conditions are beneficial to England and far more conducive to the intense pressing game Gareth Southgate’s men will play.

With that in mind, and should England progress to the quarter-finals, then it’s likely that they would have preferred to play in Kazan or Nizhny Novgorod on Friday. The mooted temperatures of between 22°C and 24°C would have been far more manageable than the sweltering Samara Arena, where we could see highs of 28°C.

It’s unlikely that fans of any underperforming nation will accept the weather as a legitimate excuse for failure, but there’s no doubt it can sometimes play a part.

As far as England and their chances are concerned, no-one could argue that an evening match played at 17°C puts them at a disadvantage. With that said, the majority of Colombia’s players now ply their trade in Europe, which creates a bit of a leveller – in this instance at least.

Every single member of England’s squad operates from within the confines of the Premier League, on these shores. Which begs the question: If a European team and a South American team of similar quality played a one-off match in dry 35°C heat, would the latter have an advantage? Almost certainly.

But would that fact definitively play a part in deciding the result? Well, that’s less clear-cut – but it’s certainly up for debate!