The rollout of an approved COVID-19 vaccine which is now available for distribution throughout the UK  marks a decisive turning point in the fight against a pandemic that has shackled the world for most of 2020.

Since early December, dozens of hospitals dotted around the country have been administering the groundbreaking jab that has seen Britain lead the way on a global effort to protect people.

Healthcare services are working flat out to ensure vaccine hubs stock sufficient dosages, with the armed forces also enlisted to assist with transportation and site management.

One of these locations – Bristol’s Ashton Gate stadium – has recently begun attending to patients via its temporary centre in the South Stand and is expected to vaccinate tens of thousands of people every single week. 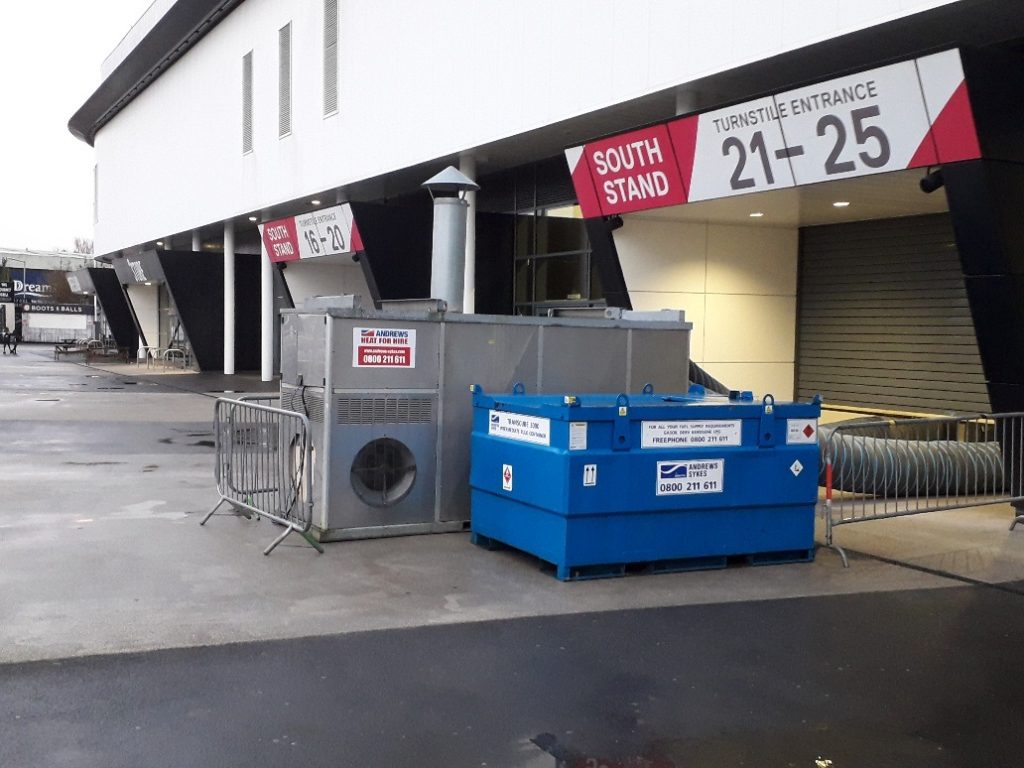 Prior to the facility opening, the region’s NHS Trust contacted Andrews Sykes and asked us to advise on a stand-in heater hire solution that could be installed and used indefinitely.

Initially, the intended purpose of the concourse conversion was kept confidential to prevent speculation around the project. However, our local expert was quickly made aware of the end goal which allowed us to spec the correct equipment based on the building’s future use.

The entire covered area situated directly beneath the stadium’s pitch-side seating was to be transformed into a fully functional vaccine centre – with climate control immediately required on site before it could open.

Given the dimensions of this large open space, we recommended the use of an FH4000 indirect fired heater. The unit was situated behind the concourse, with ducting used to circulate huge volumes of warm air around an enclosed zone spanning more than 80 metres in length.

Our kit was assessed and approved by senior directors representing the Trust, prompting them to specifically comment on the effectiveness of the FH4000 heater.

Once installed, the client then requested that we supply some additional units to be deployed within three pods from which the vaccinations would be dispensed. After considering space restrictions and power availability, it was decided that a 3kW Radiant Quartz unit would be positioned in each vaccine pod to provide safe, localised spot heating.

With the need for an immediate turnaround time obvious, we assured the customer that the entire solution could be delivered and operational the same day our proposal was accepted.

Although delighted with the level of urgency shown by the two engineers assigned to the project, the Trust’s management team explained that implementation was not required until the following week.

By Monday lunchtime, the temporary heating system that we had devised was live and performing perfectly – much to the client’s delight.

Since completing the installation, our contact at the Trust has been very vocal in his praise for Andrews Sykes. We were told that our excellent communication during a hectic two-week period combined with the responsiveness of our regional expert had been pivotal in us winning the job over a competitor, and allowed one of the country’s busiest vaccination centres to begin inoculating those most at risk.