Home Blog Andrews Air Conditioning How does the hot weather affect your business?

With summer now in full swing and much of the UK finally enjoying a sustained period of hot weather, there’s very little to complain about. Unless of course, you happen to be at work.

A recent survey conducted on behalf of Andrews Air Conditioning revealed that four in five people are discontent with their office temperature. Specifically, half the people asked complained that they find their working environment too hot – which doesn’t bode well for their companies’ productivity levels! 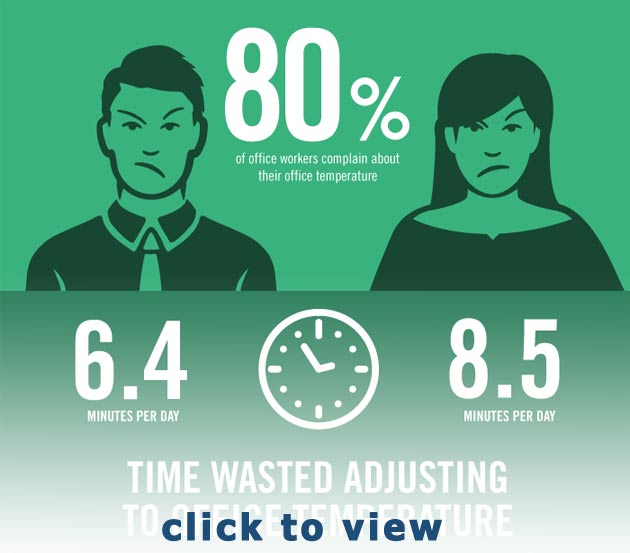 Breaking down the data into genders, we found that 20% of men actually had to leave their office to cool down, while nearly a quarter of women took similar measures. On average, men waste 6.4 minutes per day adjusting to indoor conditions – more than half an hour a week – while their female counterparts spent eight and a half minutes a day doing the same.

We’ve created an infographic banner to outline some of the more eye-opening statistics gathered which highlight the undeniable fact that unsatisfactory office temperatures do affect output.

If you require temporary or permanent cooling equipment in your premises or would like more information about our competitive hire rates, call us now on 0800 211 611. Alternatively, click here to complete an enquiry form and one of our trained consultants will get back to you shortly.