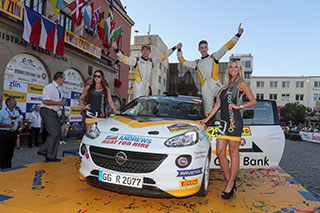 In April 2016, Andrews Heat for Hire rekindled our involvement with motorsport by sponsoring Britain’s first European rally winner for almost half a century – Chris Ingram.

More than forty years have passed since Andrews signed one of the longest ever sporting sponsorships with rally legend Russell Brookes. The company was therefore delighted to put pen to paper on a deal which sees Andrews Heat for Hire become the Mancunian’s Premium Partner for the foreseeable future.

As part of the sponsorship agreement, motorsport fans will once again to see the iconic Andrews Heat for Hire branding featured prominently on the front of Chris’ car.

David Himsworth – Operations Director for Andrews Sykes Hire – remarked after the agreement was signed: "We have enjoyed seeing the famous Andrews Heat for Hire branding back in rallying and are thrilled with Chris’ achievements during our short but successful association."