Manufacturing facilities often struggle to maintain a consistent level of relative humidity during summer, which can affect the functionality of machinery as well as the integrity of the final product. Because of this, most industrial applications rely on building management systems (BMS) to control internal mechanical and electrical equipment, including lighting, power and HVAC amenities.

With high moisture content in the air rightly seen as a very undesirable variable to contend with in a production environment, our expertise was recently requested by a national M&E contractor at a site in south London. Our client was working on behalf of a company that manufactures telecommunication components in closely monitored conditions.

New chillers and other plant were being fitted on site, with much of the original kit connected to a centralised building management system. If alternative equipment could not be sourced, a very costly manufacturing process would have been left vulnerable to the elements – and this was simply not an option. 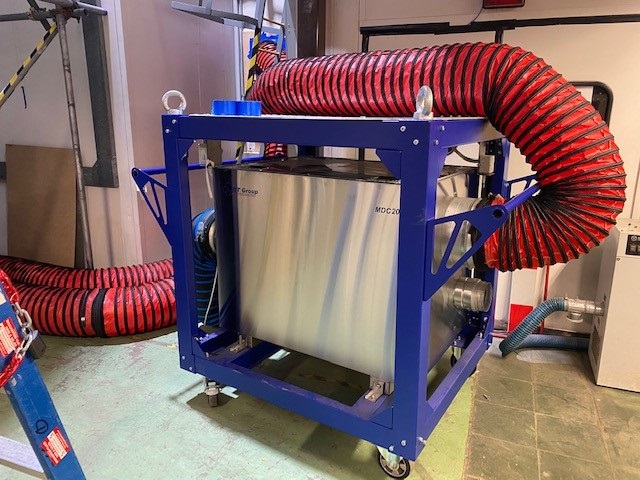 The customer explained that relative humidity had to be kept between 40% and 55%, triggering concerns that it would deviate from this range in the absence of a proper dehumidification solution. Upon receiving an enquiry at 9am, we sent our local expert to site later that same day and had agreed a purchase order for two drying units by lunchtime.

With time against us and the window of opportunity quickly narrowing, we scheduled delivery of two KT2200 desiccant dehumidifiers for earlier the following day. This was arranged for a specific slot during which output on site is typically at its lowest, allowing the equipment to be wheeled into prearranged positions inside the building with minimal interference.

There are not many suppliers that could accommodate such a niche project, particularly when the timing coincides with widespread regional flooding and a subsequent surge in demand for specialist drying units. For us, however, it’s just another day – and a perfect example of our industry knowhow appeasing a panic-stricken client with genuine concerns about their productivity being disrupted.