Winter can be a particularly daunting time for some of our community’s most vulnerable people, with the imminent soaring of energy prices likely to make the season even more challenging going forward.

That’s why we are proud to once again be working alongside the Charlton Athletic Community Trust to positively influence the lives of those who desperately require assistance.

Commissioned by the Royal Borough of Greenwich, the annual Stay Warm Stay Safe campaign has one primary objective – to help the less fortunate members of society by heating their homes while cold weather persists.

We’re very pleased to be continuing our sponsorship of the Charlton Athletic Community Trust (CACT), with next year marking a decade since our association began.

CACT has won countless awards recognising the fantastic work done in the local community and beyond, with approximately 10,000 people benefiting from their services and initiatives every single week.

We have previously teamed up with the Trust to provide employment opportunities and apprenticeships for young people – some of whom have gone on to join the business full-time and remain here to this day.

In the build-up to Easter, we received a call from the Charlton Athletic Community Trust asking if we could assist them with one of their initiatives. As long-term partners of the Trust, we have worked together for many years on a range of projects aimed at supporting local people.

So, when Jason Morgan, CACT’s Chief Executive, explained that a vehicle was required for a food collection and delivery, we were only too happy to help.

The Trust is working with the Royal Borough of Greenwich and its various partners to provide sustenance to vulnerable residents during the COVID-19 pandemic. A total of eighteen pallets of food were collected from a local supermarket and delivered to Woolwich Common Community Centre – a process that took four trips.

read more
With Christmas almost upon us and seasonal cold weather beginning to set in, now is the time where many people pause to consider the impact winter has on some of the more vulnerable members of society.

That’s why Andrews Heat for Hire are proud to be working alongside the Charlton Athletic Community Trust as part of the Stay Warm Stay Safe campaign – an initiative set up to help residents of the Royal Borough of Greenwich and surrounding areas keep warm.

This is a scheme that is very close to our heart, with the majority of employees at our flagship Charlton depot hailing from Greenwich and neighbouring towns.

We’re therefore very pleased to be donating a large number of new oil-filled electric radiators to the campaign’s organisers as a starting point of our involvement. 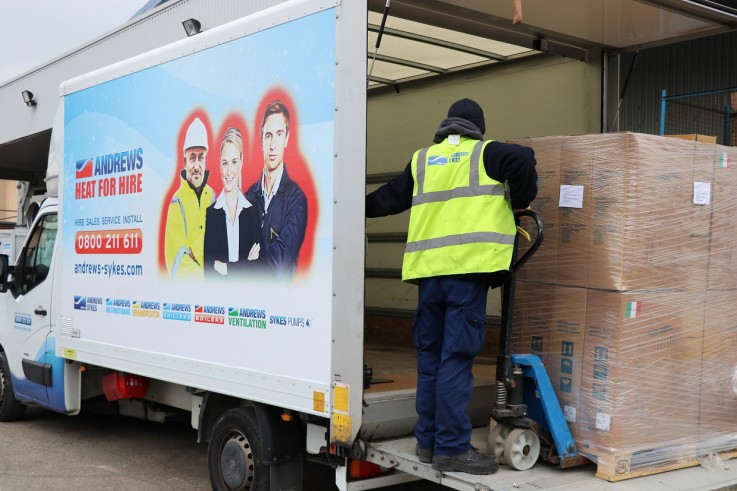 We are proud to confirm the sponsorship of this year’s Charlton Athletic Community Trust concert which will take place at the Indigo Arena at the O2 on Friday 18 May. The event will be headlined by 2015 X Factor winner Louisa Johnson, who has since established herself as one of the country’s most popular singers.

Last year, the Trust celebrated their 25th anniversary and has been collectively recognised for the fantastic work it does to empower individuals and improve lives. We’re exceptionally pleased to be working in tandem with the organisation once again and look forward to what promises to be a fantastic night for all involved.

Andrews Air Conditioning will be running a series of competitions in the build-up to the concert, with prizes including a VIP experience and the opportunity to meet Louisa. Radio DJ, TV presenter and CACT ambassador Dave Berry will be hosting the evening, and has conveyed his excitement about what lies ahead.

Dave said: “We are back at the indigo2 for another night of live music and fun. Alongside our headliner Louisa Johnson, we will once again give local young people a chance to showcase their musical gifts on stage. I am very much looking forward to hosting it.”

All proceeds raised from the gig will support the Trust’s future endeavours at the heart of the community, which is and will continue to be of huge benefit to many.

To enter, all you need to do is answer one simple question by clicking here. The competition is open between Tuesday 20 March and will close at 10:00am on Tuesday 10 April. read more

Trust CEO Jason Morgan MBE met with our senior management team to sign the contract in July, and they were joined by former Charlton player Bob Bolder – who now runs goalkeeping courses for children in the Kent area.

“They’ve been a big supporter of our work in the community for a long time now and it’s great to have the continued support from a local organisation like theirs.

“Andrews have also agreed to support next year`s concert which is hosted by Dave Berry at the Indigo2 and follows on from previous successful events held at the venue.”

Paul Wood, Managing Director at Andrews Sykes, said: “We are delighted to continue our partnership with the Community Trust, which allows us to extend our close relationship for another two years.

“As a company, we’re very proud to be associated with an organisation that does great work in our local community and look forward to supporting the many initiatives they run throughout London and the South East.”

Following this announcement, we are also pleased to pledge our support to the Community Trust’s annual Fun Day, which this year takes place on Saturday 30th July. As official sponsors, Andrews Sykes will be present throughout the afternoon and look forward to running our famous shooting competition – which proved extremely popular among young football fans last year! read more

We are delighted to be sponsoring the Charlton Athletic Community Trust’s annual gig at the Indigo Arena, which will this year be headlined by Rixton on Thursday 9th July. Local artist Autumn Sharif – who made her breakthrough on The Voice – will also be supporting Rixton on the night having recently made her own big strides in the music industry.

CACT is renowned for its commitment to empowering individuals from a wide range of backgrounds, using the power of football as a central focus. As the Trust’s back of shirt sponsors, Andrews Air Conditioning are extremely excited to be involved in proceedings for a second successive year.

We are also looking to run a number of competitions alongside the event, with prizes including a VIP experience on the night (as well as meeting the band backstage). There will also be an opportunity for winners to meet first-team players from Charlton Athletic’s current squad, among other things. Entry details will be announced shortly.

Capital Breakfast show host and CACT Youth Service Ambassador Dave Berry will be hosting the event once again, and is confident that all in attendance will go home happy. He said: “Rixton have a huge fan base all over the world and know how to put on a show. I’m so pleased they will be headlining this year’s gig.”

Tickets are now on sale and are predicted to be snapped up quickly. Book now or call 0844 824 4824 to guarantee your place on what promises to be a fantastic evening. read more

When the Charlton Athletic Community Trust launched a new Give Youth a Chance initiative, we at Andrews Sykes were among the first companies to pledge our support to the scheme.

And a month after getting off the ground, the programme has already paid dividends as one local teenager excitedly recalls.

19-year-old Zeppelin Machen-Smith was one of thousands of young people struggling to find work until he was presented with the opportunity to do a pump engineering apprenticeship at our Charlton base.

He recalled: “I was with my family and my uncles were peering behind the door and my Nan and Granddad were jumping up and down as well! There was a lot of hugging and (I was) very happy throughout the day.

“I’m grasping the basic things and it’s very satisfying to learn new things every day. I want to learn, and they’ve explained to me in the way I need to be taught.”

Andrews Sykes are well-known for making an effort to giving young people a first step onto the employment ladder and we are therefore proud to be involved with projects of this nature.

“This is something the company feels very passionate about,” explained HR Manager Tracey Lawrence.

“Having a successful succession plan for any organisation is crucial, and people like Zeppelin are key to that.”

The ultimate aim is to help 500 people obtain full-time work, and Zeppelin’s story highlights our commitment to making this happen.

With the backing of Andrews Sykes and other businesses in London and beyond, there is every chance that Give Youth a Chance will reach its target – to the benefit of all of parties concerned. read more