When a major housebuilder working on a new residential development in Surrey encountered a drainage issue on site, they turned to Sykes Pumps for assistance. The problem stemmed from the fact that many homes were already occupied before connections had been fitted to the drainage system installed beneath the properties.

Essentially, this meant that rainfall was retained inside a manhole which needed to be continuously emptied to prevent it from overflowing and flooding the surrounding area. The client indicated that they expected a significant delay caused by difficulties with getting the connections sourced and fitted to resolve the issue. 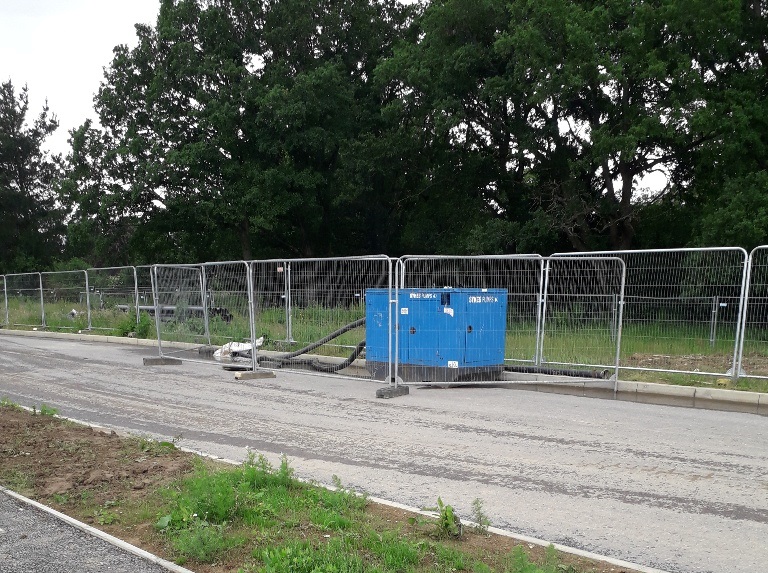 In the meantime, a temporary pump hire solution was needed to ensure the water did not rise above what was deemed a safe level. As a regular customer, our client was confident in Sykes’ ability to devise a solution in an emergency having previously sought our advice at another site on the South Coast.

In fact, the project manager was so familiar with our kit that he specifically requested a single Super Wispaset 100 unit. The pump was accompanied by the appropriate quantity of hose which was used on the discharge side to transfer the water into an operational drainage system located a short distance away. Sykes’ Super Wispaset 100 model is housed in a silent canopy to reduce any noise impact on the occupied homes nearby.

This hire was initially expected to last a week but was extended due to a hold-up with obtaining the drainage connections. From our perspective, however, the project was extremely straightforward and showcased our ability to deliver and install the correct pump arrangement during an emergency.