A delegation of players, backroom staff and club officers were welcomed to Andrews Sykes’ Charlton Hub, one of the busiest in the nationwide network of Climate Control and Pump Hire facilities

Yann Kermorgant and Johnnie Jackson represented the players and were kind enough to don the striking black and white kit for photo opportunities with the Andrews Sykes team. They had a tour of the facilities and met many of the staff and answered questions and signed autographs – many of those who work at Andrews Sykes are long standing Charlton fans so this was a real treat. Maybe for the players a short break after hard pre-season training was also a welcome change of pace as well, but both looked in good condition and are clearly raring to go for the new season

Andrews Sykes moved to the new premises in 2012, from the previous locationa few hundred yards away, and have a long association with Charlton, which is the operational focus for much of the company’s activity. The close relationship with Charlton Athletic Football Club is something of real value to Andrews Sykes 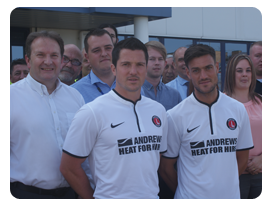