Andrews Sykes is delighted to share the news of the successful completion of the daunting ‘London to Amsterdam’ cycle challenge by our sponsored team of Andy and Nick Chipperfield, who are closely linked to Charlton Athletic Football Club. This builds on our recently announced shirt sponsorship 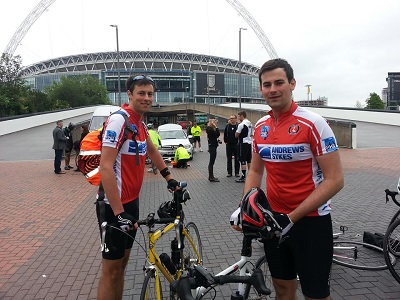 Wembley Stadium for the start

The intrepid duo embarked on the 155-mile cycle ride on Friday, June 14th alongside former England, Watford and AC Milan striker Luther Blissett and a number of other famous figures.
We understand that Holland is a great place for cyclists, being nice and flat, having decent quality roads and relatively low levels of traffic – all very cyclist-friendly. But taking on the challenge of cycling a huge distance across country in ‘less cyclist friendly’ Britain just to get there to sample these delights seemed a bit extreme, so there must be a good reason we reckoned, and of course there was.
Read more here. 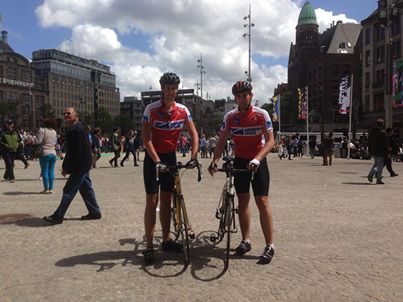 Prostate cancer is the leading cause of cancer related death in men in the UK, and is as prevalent as Breast Cancer is in women, yet receives far less profile and attention – of course both are appalling in their consequences and both deserve the fullest of attention and resources, but maybe addressing the imbalance is overdue – sponsored challenges like this are thoroughly deserving causes and one with which we are happy to be associated. Our contribution helped them to raise in excess of £3000 which will be put to great use by Prostate Cancer UK – a splendid outcome

Andy and Nick did us proud, finishing a very respectable and according to them unexpectedly close 3 minutes behind the leaders after 176 gruelling miles (there was a minor unplanned diversion, as if 155 miles wasn’t enough….). They kept a diary and some of the entries about bruises, pain and suffering and dealing with some pretty ropey weather on the way make uncomfortable reading; our respect for them is great indeed.

A number of Andrews Sykes staff are keen cyclists, mentioning no names, so maybe the thought of taking a larger contingent should there be a next time could be ‘encouraged’ – but for now we salute these two brave and admirable souls
Join those who have made a contribution on – Just Giving page.