Just over a month ago, we announced a partnership with the GB Rowing Team in which we supplied temporary air conditioning units, in a bid to keep their training base cool. The camp – in Breisach, Germany – is renowned for having the best facilities in Europe but in years gone by, the heat has affected athletes’ sleeping patterns.

To counter this, we provided a total of 25 Polar Wind portable units to ensure competitors remained cool throughout the duration of their visit. And with the World Championships set to commence in Amsterdam this Sunday, we received a “thank-you” online postcard from the Rowing Team following a successful period of training.

Paul Thompson, Chief Coach for the Women and Lightweights Rowing Team, said: “The Breisach camp is critical to our major event preparation every year. There is a lot of training; recovery from that training is key to the rowers’ adaption to the training stimulus. 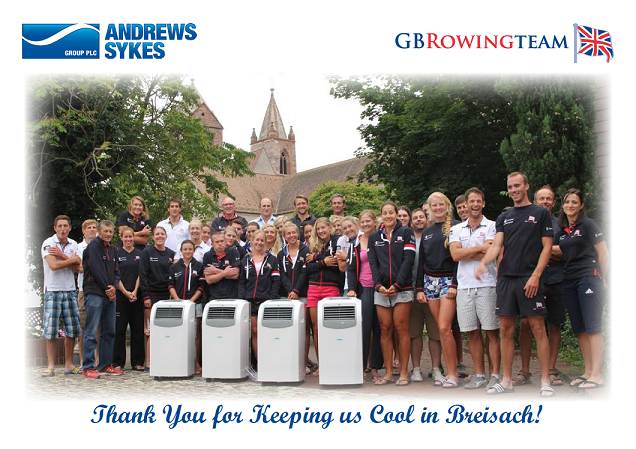 “The temperatures can climb into the high 30 degrees which adds an extra physiological stress between sessions and can affect sleep at night which inhibits the training adaption. So, it was a huge boost to us this year to have Andrews Air Conditioning units to keep us cool when we needed it.”

He continued: “The rowers benefited from the camp environment created by the air conditioning and it has put us in a good place to go on to win medals in Amsterdam.”

The World Rowing Championships is regarded as the highlight of the international rowing calendar in non-Olympics years, so Andrews Air Conditioning is delighted to assist the GB Rowing Team’s preparation ahead of the competition.

Their sustained success prior to and since London 2012 has fuelled belief that the squad will once again perform admirably during the week-long event.  We wish all participants the best of luck and look forward to watching their progress closely when the action gets underway.