We are continuing to follow Government directives relating to the COVID-19 virus and we are taking the necessary actions to provide our staff and customers with the best solutions to the changing situation. Although many of our staff are now working from home, we are still ensuring that emergency and urgent deliveries can be carried out as safely as possible.

Andrews Sykes provides hire solutions to many essential services including: the health sector, communications networks, water industry, emergency services and many more. We will prioritise these services at all times.

With the World Health Organisation recently reinforcing its stance on the potential for viruses to be transmitted between people inside crowded indoor spaces, there has been a noticeable increase in demand for ventilation hire solutions from gyms. Latest guidance advocates an increase in air extraction but also ensuring that such applications reap the benefits of as many air changes as possible – with six per hour the recommended minimum.

Following this well-publicised advice, Andrews has received a number of enquiries for temporary air cleaning and ventilation units – including from one of the UK’s most popular sport and leisure providers.

As experts in the provision of temporary climate control solutions, Andrews Air Conditioning has provided the GB Rowing Team with cooling relief for a number of years.

The World Rowing Championships took place in Bulgaria in 2018, with both the women’s and men’s squads desperate to excel at what is seen as the most prestigious event on the rowing calendar.

And while the weather in the UK was comparatively cool as we approached the end of August, temperatures in Le Temple-sur-Lot – where the women’s team were training – reached 35°C most days.

The players were undergoing various fitness tests at their Eltham training ground, with a cooler environment required to ensure their schedules were not impacted in any way.

A club representative contacted us to explain the problem before an expert from our local depot visited the training ground to assess which equipment would be most suitable. After assessing the size of the areas in which cooling was required, it was decided that three PAC 22 split type air conditioning units would be ideal for the application and quickly address the stuffy environment.

Like any environment where electronic hardware is present, data centres, server rooms and IT facilities are extremely susceptible to the build-up of static discharge. Current guidelines recommend that data centres have a humidity level 60% relative humidity, with an allowable range of between 20-80% RH. This means that at certain points of the year, almost every data centre will need the use of a humidification system to instil these internal conditions.

The NHS, space travel and Concorde are perceived to be the ‘coolest’ things in the world, according to a poll of 2,000 British adults.

And when it comes to the coolest people, James Bond was the top choice, despite being a fictional character.

During the hottest weekend of 2019, BT encountered some difficulties with the cooling of their data centre in Reigate, Surrey. The customer’s existing air conditioning system had failed unexpectedly and left critical servers in potential jeopardy, with internal temperatures estimated to have reached between 50⁰C and 60⁰C in the absence of climate control equipment.

An emergency replacement hire was subsequently required immediately, prompting Andrews to arrange the out-of-hours delivery of a 100kW chiller a short time after being contacted. The chiller was located outside the application and connected to an air handler deployed within the data centre itself, enabling large volumes of cold air to be circulated inside.

Andrews Air Conditioning was approached by BT after fears that a major telephone exchange was a risk of overheating. It was reported by the customer that their existing cooling system struggles to perform at full capacity once ambient temperatures exceed 28⁰C. They were looking to preserve telecommunications services from their site located at Old Street, which acts as a focal point for BT’s exchanges serving London.

With seasonal temperatures surpassing 30⁰C at the height of summer, BT requested a reliable temporary air conditioning hire to safeguard their network and protect exchange racks operated on behalf of other telecoms providers.

People in Britain are convinced extreme weather conditions are here to stay, with 85% believing it has become the norm.

Flooded roads, fallen trees and damaged fences are no longer seen as rare occurrences. In fact, a quarter of 2,000 adults surveyed admitted they had been victims of flooding in some form.

Brits also estimate they’ve spent upwards of £790 in the last five years on repairs to their homes as a result of weather damage.

And more than one in 10 have had to spend more than £2,000 on weather-related restorations. 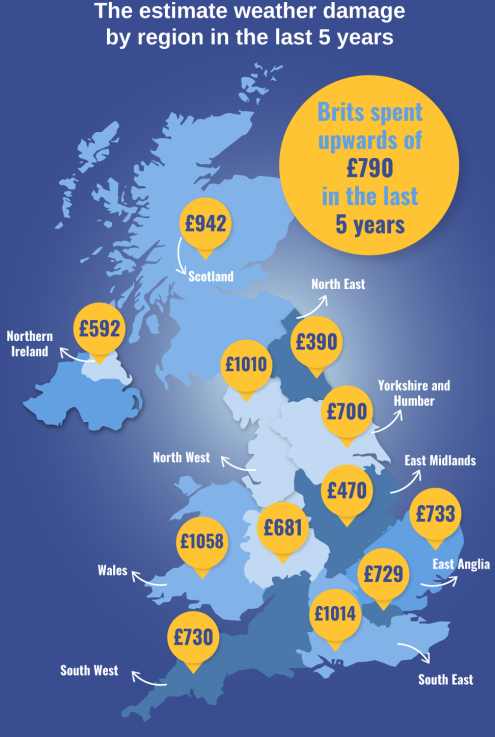 And with an estimated 3,300 homes hit by extreme floods across the UK in recent months, 73 per cent believe the government need to do more to help people who suffer damage to their home from such circumstances. read more

At Andrews Heat for Hire, we aim to provide customers with practical, fuel-efficient solutions tailored to precise requirements and budgets. This simple and successful approach is founded on decades of expertise across all industries and ensures our clients are in safe hands regardless of their situation. We understand that those who seek temporary heating are faced with a multitude of options, which is why we assess each requirement on its own merit to guarantee that the best course of action is followed every single time. By eliminating uncertainty and explaining the reasoning behind a proposed heater hire arrangement prior to its implementation, we provide a level of peace of mind that sets us apart from our competitors.