Britain is often stereotyped as a nation of moaners. A population made up of men and women who love nothing more than to complain about, well, anything really!

On any given day during the autumn and winter months, you’re likely to catch wind of someone complaining how the temperature has dropped, or the weather has turned, they battle to talk about whether a bug going round our office, or the fact that it’s gotten dark all of a sudden. God forbid anyone mentioning that ‘winter is coming’.

So it’s no surprise that A study in 2016 by the Ombudsman Services calculated that in total, Britons made up to 52 million complaints within the year. We, Andrews Sykes decided to look a little deeper at this data and combine it with some our own, by considering complaints from across the UK around weather, temperature and illness complaints in order to discover Britain’s biggest moaners.

By Using a social media monitoring tool, we analysed over four million social media posts on winter subjects to Britain’s Biggest Moaners. These include when to turn the heating on, the common cold, the weather and even the dreaded man flu. In this post, we look at how illness affects the UK over the winter months and how social media users use Twitter, Instagram and Facebook to tell us exactly how they feel about it.

Everyone gets the sniffles sometimes – it’s unavoidable. But rather than grabbing a box of tissues and keeping a stiff upper lip, the British public took to Twitter, Facebook and Instagram to complain. The public came in their droves, with 393,759 social media complaints about feeling unwell. The most popular months for these complaints were November and February and women were found to be more likely to complain than men – by making up 59% of those complaining about feeling ill online. 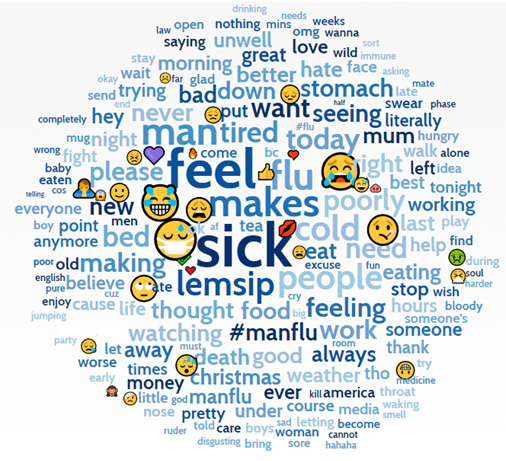 The above word cloud shows the most likely words and emoji’s used (minus a few expletives) when looking to complain about being ill over winter 2016. Looking at the cloud and reading a little further into the data, we find the usual suspects here as well as wide and varied use of emoji’s as users flood their timelines with complaints. But best of all the complaints include ‘Tea’ , ‘Mum’ and ‘Lemsip’ – making for a very British list of complaints indeed. 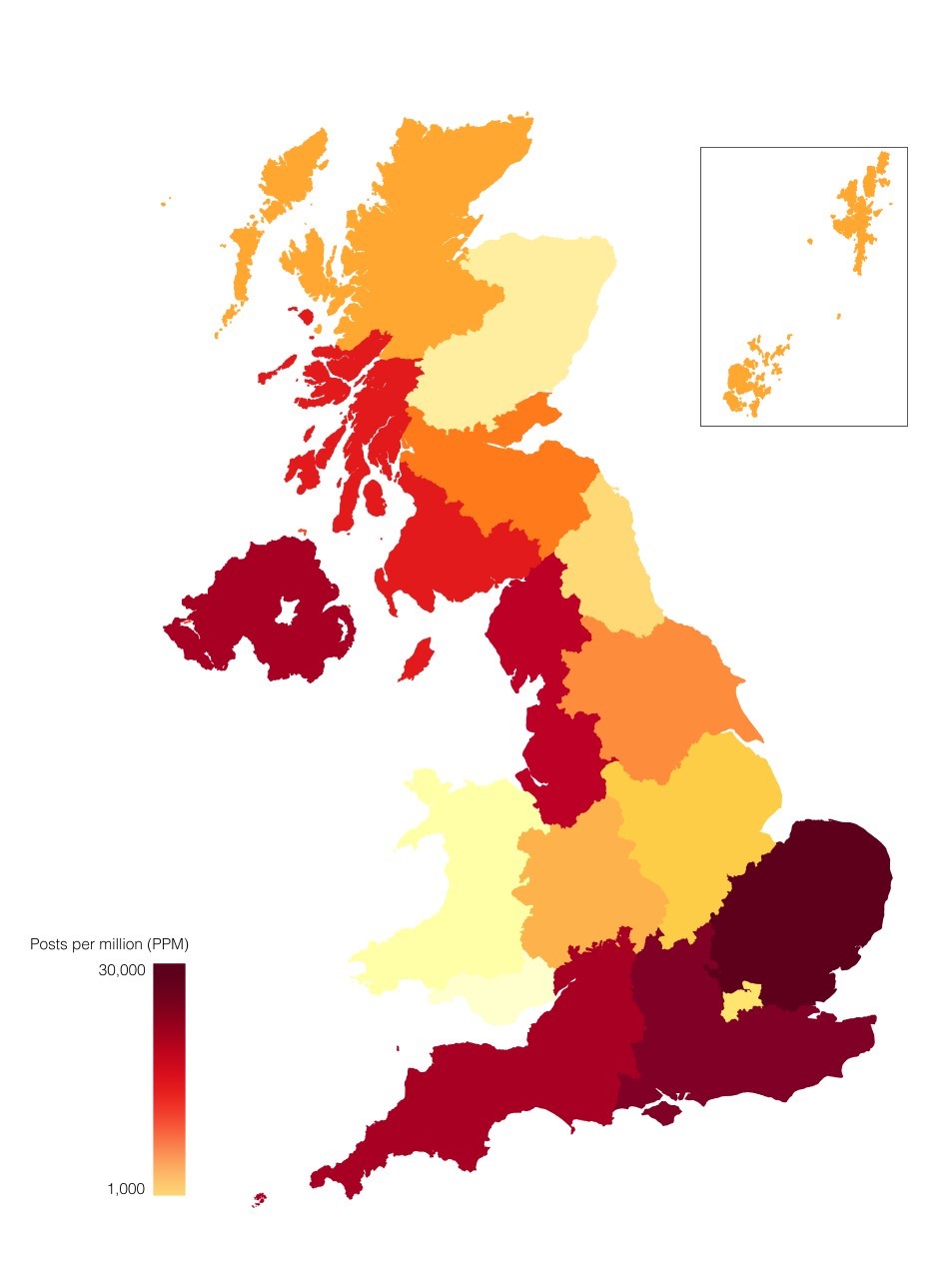 Heat map showing concentration of complaints on illness in 2016

Our research found that the highest percentage of social media posts around feeling ill per capita was concentrated within East England, which made up 16% of all social media activity around feeling ill. Totalling at 29,545 post per million (PPM), Dover was the city with the highest number of complaints in the UK, followed by Exeter (18,387 PPM), Wick (15,530 PPM) and Cambridge (14,709 PPM)

Those least likely to complain were those in East Scotland and Wales, which made up a tiny two and one percent of all complaints made over 2016 winter respectively. The toughest cities in the UK, those that complained the least were, Omagh (1,757 PPM), Southend on Sea (2,639 PPM) and Perth (2,799 PPM).

So, what does it mean for people of the South East? Are they more likely to catch a cold than the rest of the UK? This seems unlikely. However, residents in the South East are much more likely to complain about being ill than their Welsh and Scottish counterparts, pass the tissues over please, guys?

The ‘illness’, which only effects males, and displays almost identical symptoms as the average cold or bout of influenza but with a much higher severity (according to its victims anyway), has inspired everything from a range of vitamins and supplements, a type of soup, to actual scientific experiments in order to provide proof of the diseases existence.

These involved monitoring the effects of flu in male and female mice that were injected with the human genome. There seems to be some scientific evidence to suggest that females have a stronger immune system than males, and that viruses have evolved over time to hit males harder than females. However, official guidance provided by the NHS suggests that man flu exists, but only in the eyes of men who are prone to complaining when it comes to illness.

This advice, however did not stop 18,504 social media posts from men being sent complaining about suffering from the illness over the course of winter 2016. 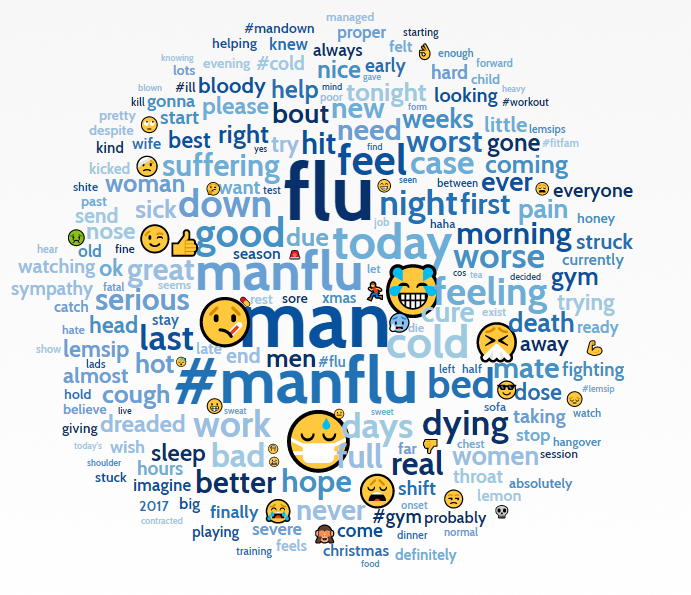 Common themes that appear from looking at this data in more detail include the phrase ‘dying’ , ‘suffering’, ‘dreaded’ and ‘bed’. But, where do men suffer the most across the British Isles, who is blighted the most by the illness and where are men most likely to keep a stiff upper lip and put a brave face on? 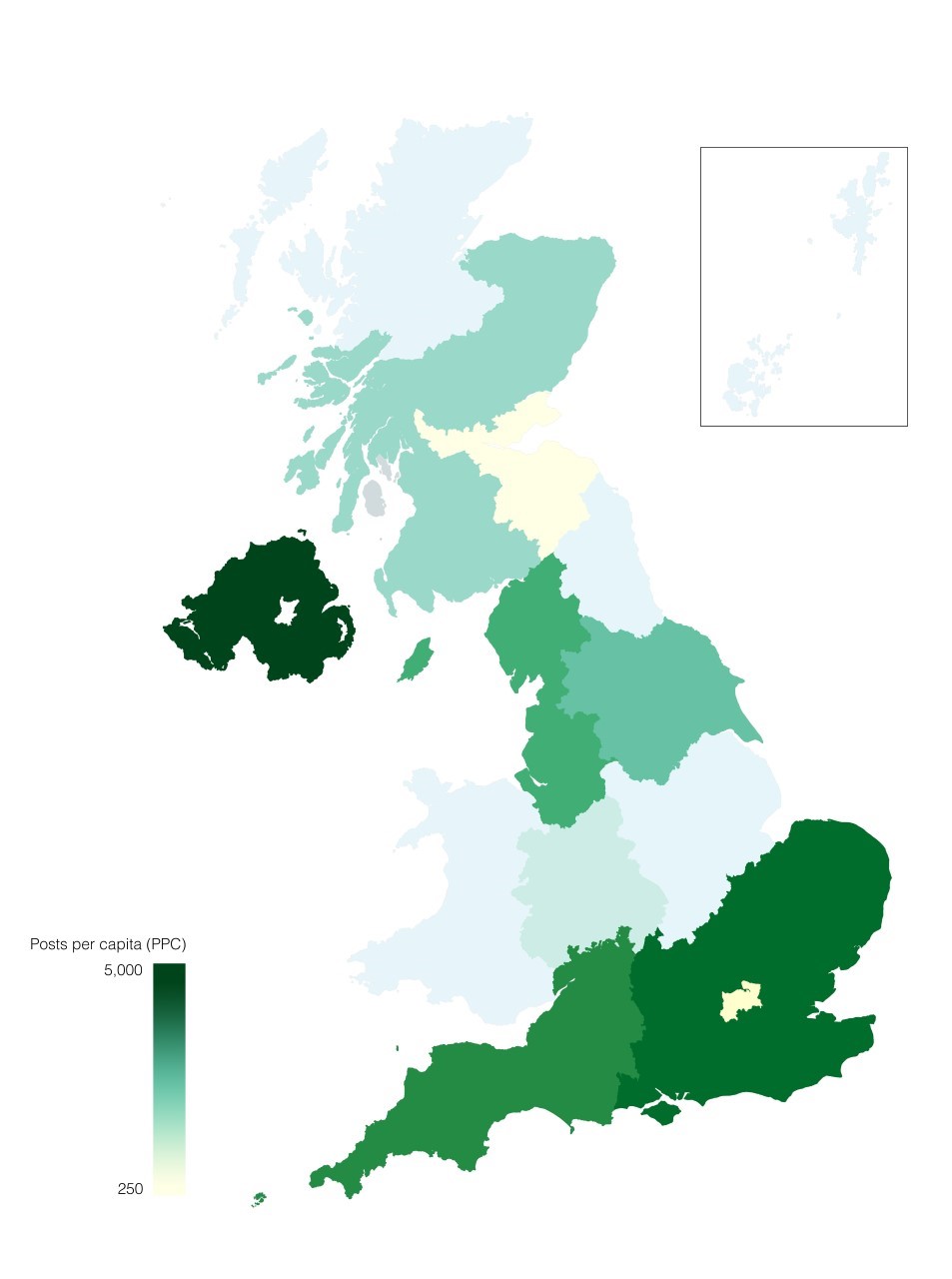 Northern Ireland leads the way in online complaints about suffering from man flu by making up 16% of all complaints, followed by the East and South East of England at 14% each. The hardiest of the bunch are Londoners and men from the North East, who each make up only 1% of complaints around man flu.

Peak trending time for the trending of man flu on social media was mid December last year. Flu season traditionally peaks around this time as well. Whether this is pure coincidence or lends further weight to the argument that man flu is just in fact regular flu, with the addition of a male ego, we’ll leave that up to you to decide.