The Rowing World Championships in Holland are now nearly upon us, with the GB Rowing Team currently preparing themselves for what is traditionally a demanding training camp at their usual quarters in Breisach, Germany.

Boasting Europe’s best facilities, the town offers athletes an ideal platform for physical activity and planning ahead of what is widely regarded the biggest event in the rowing calendar. This year’s World Championships will be held between the 21 and 28 of August at the Willem-Alexanderbaan in Rotterdam.

In 2015, Great Britain performed fantastically and secured a total of 15 medals – including five gold – six more than any other country.

It is therefore hoped the team can make further improvements this summer and build on last year’s record haul!

As the country’s leading provider of tailored climate control hire solutions, we at Andrews Air Conditioning are delighted to announce an extension of our partnership with the GB Rowing Team. We are once again extremely excited to work alongside one of Great Britain’s primary sporting success stories and will take steps to ensure all participants remain cool during a crucial period of preparation. 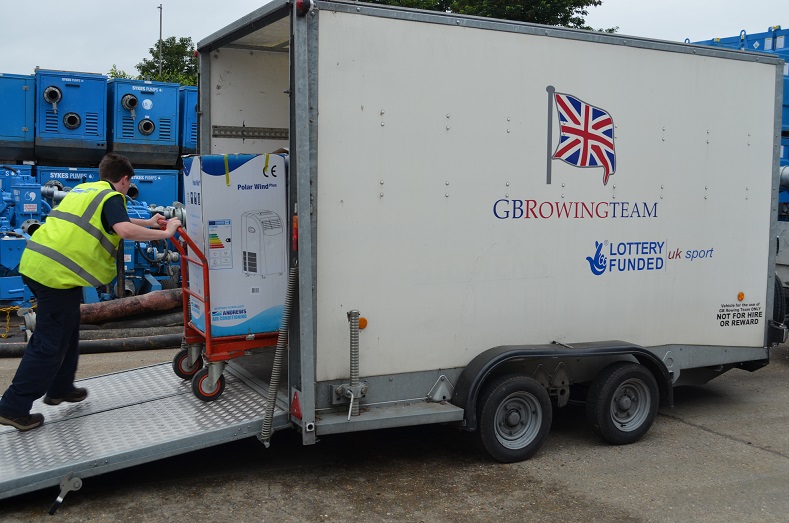 We have supplied a total of 20 Polar Wind Plus portable units which are to be located within the training camp’s living quarters. This arrangement will enable competitors to sleep comfortably and keep them fresh during an intense and vigorous “heavy work” regime.

The products have already been collected from our flagship London depot and will now embark on a 550-mile journey to their final destination in south-west Germany. Once installed, the Polar Winds will easily neutralise the otherwise overbearing conditions which can see temperatures in the region regularly exceed 30°C.

We’d like to send the squad our best wishes ahead of the upcoming World Championships and look forward to monitoring their progress throughout the week.

There will also be intermittent updates provided by some of the rowers themselves – including Olympic silver winners Chris Bartley and Peter Chambers. Keep an eye on our blog and Twitter page for first-person accounts on how things are going!